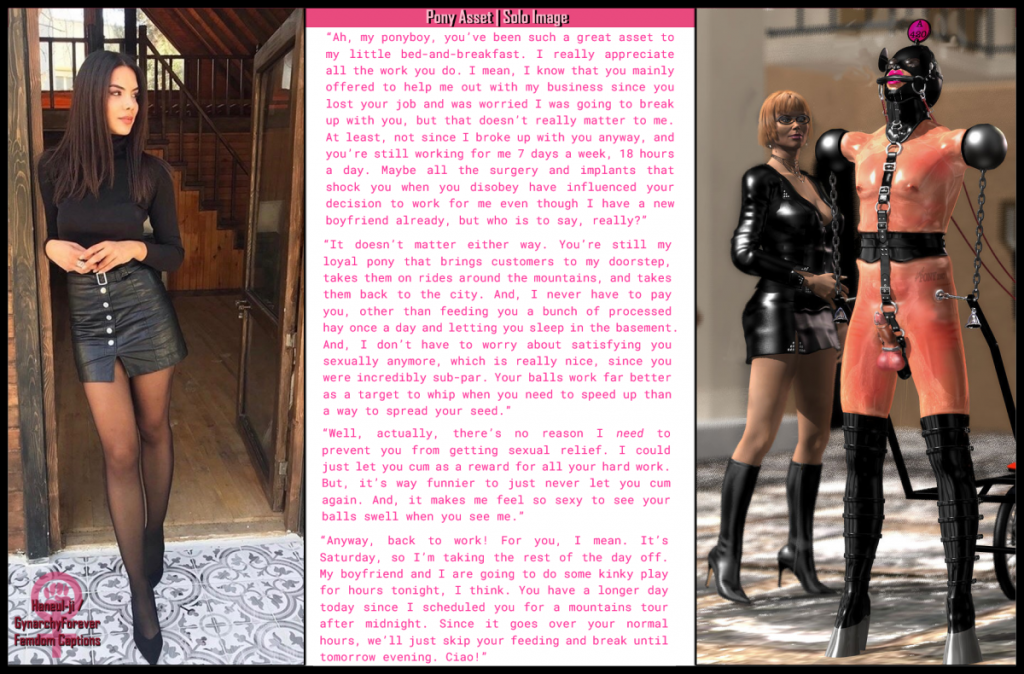 “Ah, my ponyboy, you’ve been such a great asset to my little bed-and-breakfast. I really appreciate all the work you do. I mean, I know that you mainly offered to help me out with my business since you lost your job and was worried I was going to break up with you, but that doesn’t really matter to me. At least, not since I broke up with you anyway, and you’re still working for me 7 days a week, 18 hours a day. Maybe all the surgery and implants that shock you when you disobey have influenced your decision to work for me even though I have a new boyfriend already, but who is to say, really?” “It doesn’t matter either way. You’re still my loyal pony that brings customers to my doorstep, takes them on rides around the mountains, and takes them back to the city. And, I never have to pay you, other than feeding you a bunch of processed hay once a day and letting you sleep in the basement. And, I don’t have to worry about satisfying you sexually anymore, which is really nice, since you were incredibly sub-par. Your balls work far better as a target to whip when you need to speed up than a way to spread your seed.” “Well, actually, there’s no reason I need to prevent you from getting sexual relief. I could just let you cum as a reward for all your hard work. But, it’s way funnier to just never let you cum again. And, it makes me feel so sexy to see your balls swell when you see me.” “Anyway, back to work! For you, I mean. It’s Saturday, so I’m taking the rest of the day off. My boyfriend and I are going to do some kinky play for hours tonight, I think. You have a longer day today since I scheduled you for a mountains tour after midnight. Since it goes over your normal hours, we’ll just skip your feeding and break until tomorrow evening. Ciao!” 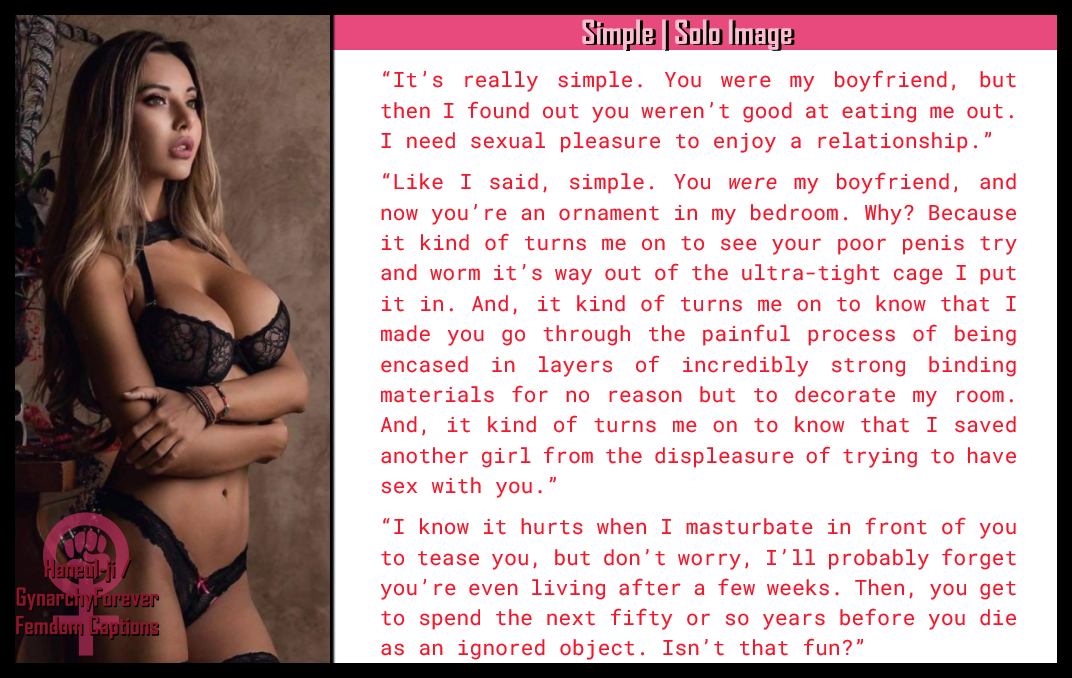 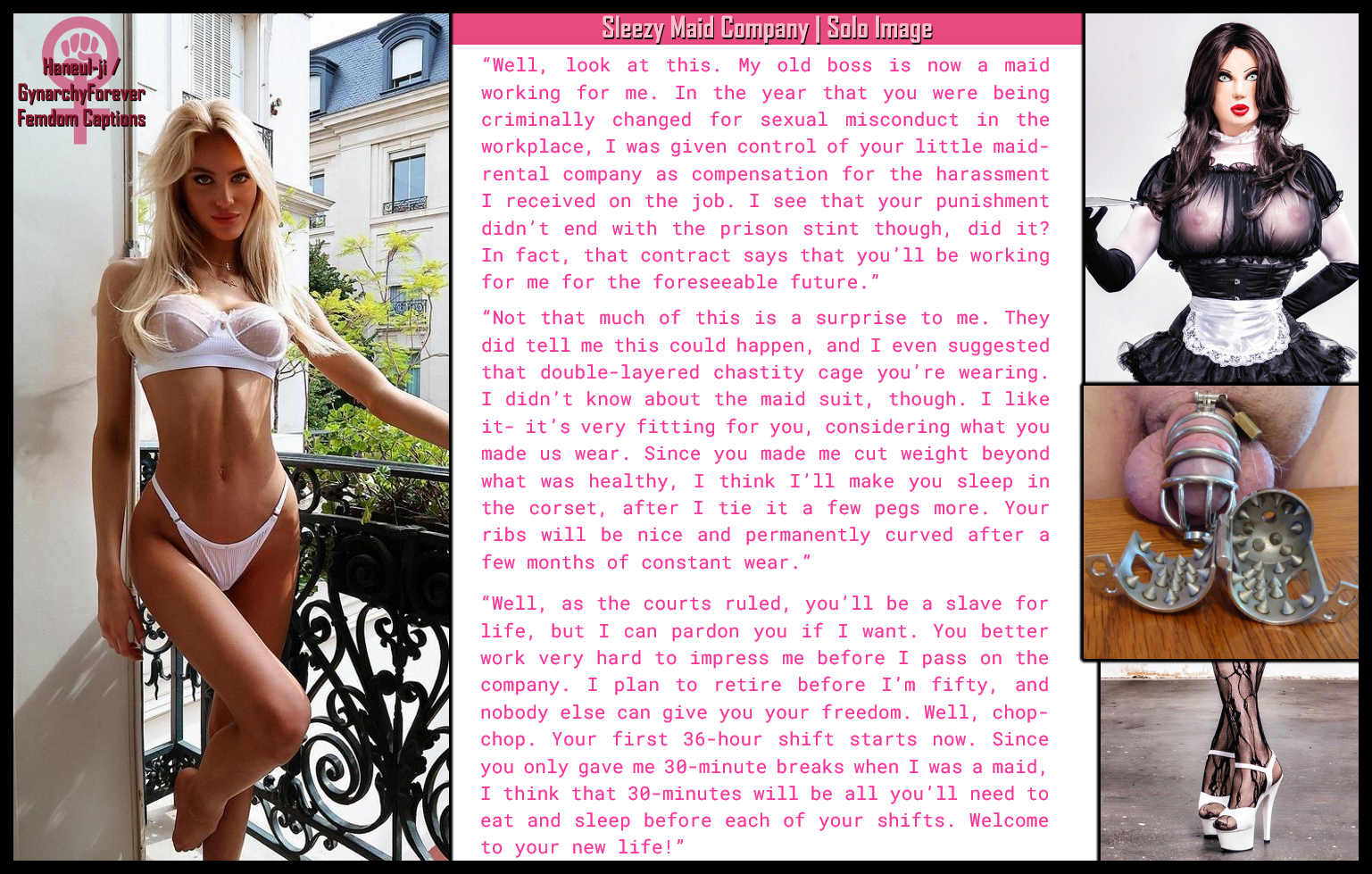 “Well, look at this. My old boss is now a maid working for me. In the year that you were being criminally changed for sexual misconduct in the workplace, I was given control of your little maid-rental company as compensation for the harassment I received on the job. I see that your punishment didn’t end with the prison stint though, did it? In fact, that contract says that you’ll be working for me for the foreseeable future.”